Crash Course For Beginners For Python With Tutorials 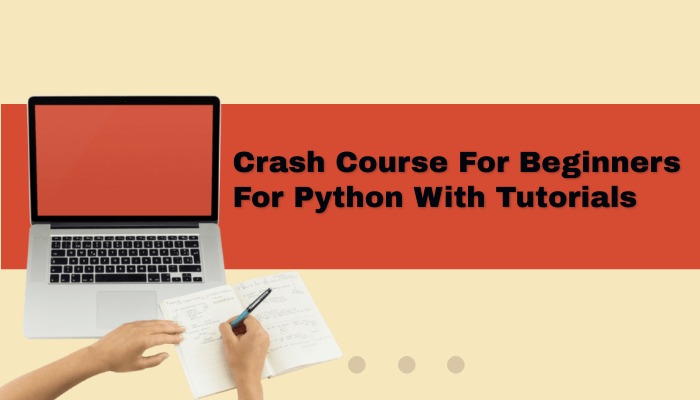 Ever find yourself looking at the vast world of coding and drawing a blank as to which programming language to choose? Don’t worry, we have been there too. A great place to start in that case would be to learn one of the most widely used, popular and versatile languages, Python. Of course, like any other language, Python does have its fair share of technical jargon and complication but if you want something that will simplify the process to you, then look no further. This is the ultimate guide for Python for beginners inspired from beginner courses and tutorials. Let’s begin!

What can you do with Python?

Python is a multi-purpose programming language; thus, you can use it for a variety of different tasks. You can use Python for machine learning and AI (artificial intelligence) As a matter of fact, Python is the #1 programming language in machine learning and date sciences. It is also extensively used in web development as many amazing websites have been created with the help of Python. For instance, YouTube, Instagram, Pinterest, Spotify, Dropbox and so many more. Python can also be used to save your time and increase your productivity by automating repetitive tasks.

Features of Python for beginners

To start off, you will need to visit www.python.org to download the latest version of python onto your system. Along with this, you will need to download and install a code-editor to write our code and execute is. One of the most popular ones for Python is Pycharm but there are many others like it online. A language like Python deals with ‘strings’ Strings are nothing but sequences of data in your code. Always remember, whenever you are using textual data in your Python code, always surround it with quotation (“”) marks to make it valid.

Just like many other programming languages, Python relies on the coder to type a certain function into the code for it to execute results. For instance,

In the aforementioned example, the word ‘print’ acts as a function that directs the code to print out an output that says, “Python Tutorial for Beginners”

Python also makes use of variables. We use variables to temporarily store data in a computer’s memory, for instance, the price of a product, someone’s age, etc. Say we were talking about age; our python variable would look something like the following:

Within this example, we are attaching the value ‘21’ with the label of the term ‘age’ and storing it temporarily in a computer’s memory. To print this variable out, you just need to combine the print function to this step as follows:

Since the value of the term ‘age’ = 21, our output would display the value ‘21’ of the age variable. Since Python code is interpreted and executed line-by-line, from top to bottom, of you were to type another value for the ‘age’ variable, the program would only consides the latest change you may have made. For instance,

As a beginner, why should you choose Python?

Why Python? You may ask. Well, here is exactly why.

As a beginner learning Python, the aforementioned information and details should help you start off your journey into this otherwise unknown terrain. Remember, you will only get better at coding as long as you relentlessly practice programming with Python. And since it is an easy and one of the most forgiving programming languages, there is always more to learn and always room to grow. Stay tuned for more such articles as we dive deeper into the nuances of Python and other similar programming languages, for beginners and experts alike. Happy learning!